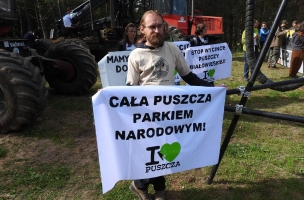 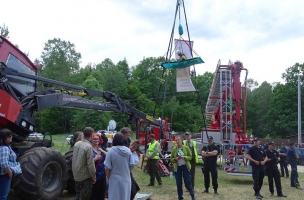 Stand in solidarity with the Bialowieza Forest!

The unique Bialowieza Forest in Poland is under attack. Bialowieza Forest is one of the last remaining parts of a vast, primeval forest that once spread throughout the European Plain. It is home to many rare and endangered species of animals and plants including the European Bison, the last of its kind. Heavy logging machine led by the State Forests – a corporation which manages forests in Poland – is turning this beautiful wilderness into a depressing felling site. The last forest giants: oaks, hornbeams, and spruces are falling.

Today, like never before, this Forest needs your support! We must stand one by one to save the nature of this place – to protect the uniqueness of the Forest for itself, for our children and grandchildren. Forest destroyers, who have broken international agreements and devastated the UNESCO world heritage site, cannot take a step further!

HOW CAN I HELP?

Organise a solidarity action in your country.
You can use these A3 posters:

WHAT WILL THE MONEY BE USED FOR?

Almost 20 years ago we made efforts to fully protect the Bialowieza Forest – the last remaining lowland natural forest which is unique in Poland and Europe. It is also a Natura 2000 site, a world biosphere reserve and a UNESCO Heritage Site. Thanks to our efforts in 1996 the Białowieża National Park's area was doubled – it was increased to 10,502 ha by connecting the part of the area of two neighboring forest districts – and a 3224 ha buffer zone was created around the park.

In 2011 we managed to further strengthened the protection of this ecosystem by establishing a protection zone around the Białowieża National Park which eliminated disturbance caused by hunting in the buffer zone.

Finally in 2012, as a result of cooperation in a broad coalition of NGOs, we managed to reduce the cutting of trees to a level that did not disturb the balance in the Forest and allowed local needs for timber to be met thus preventing conflictions with the local community. At the same time commercial forest management was prohibited in 100-year-old or older tree stands that were not human-planted.

What we are witnessing now in the Bialowieza Forest is overexploitation on an unprecedented scale, an unsustainable forestry economy of Jan Szyszko - the Minister for Environment in the populist Polish government. State-owned Forest Company supported by the Ministry is cutting hundreds of trees under the pretext of fighting bark beetles (which are in fact natural and vital element of this ecosystem!), breaking international regulations and a moratorium on centennial trees. Between January and May 2017 over 10 000 trees have been cut down in the over-100-years-old parts of the Forest. A recently issued legal ban on entering major parts of the Forest serves as a pretext to hide the intensified logging from public opinion. It also allows to fine anyone who breaks this controversial regulation and directly hits the local tourist industry.

As a member of the coalition of 7 Polish environmental organizations we sent a complaint to the European Commission which then launched the procedure against the Polish government. This means that the Commission considered the arguments of the Polish Ministry of the Environment as invalid and upheld the view that an increased logging in the Bialowieza Forest violates Community law.

The actions are urgent because:

You may support us by donation: